What was it about Silent Hill 1 and 2?

Looking back on a true horror classic

In 1999, Konami published the original Silent Hill for the first Sony PlayStation console. With an emphasis on tank controls, clunky combat and puzzle solving – it was easy, at the time, to dismiss it as a Resident Evil (1996) clone meant to cash in on the 3D survival horror game trend – but over the years it became clear that it was something much greater, something which changed the horror genre forever.

Silent Hill’s far reaching influence can be felt even today – with games as recent as The Evil Within 2 taking inspiration from it. But how did this series come to be, and what made it so special? Today, I’ll be diving in deep to bring you the history of this beloved franchise.

Much of what Silent Hill managed to accomplish is even more impressive in light of how unlikely the whole project was to turn out even halfway decent.

The development for this title was very troubled – with team members consisting of developers from failed projects who intended to leave Konami and struggled with creative control throughout the process. Konami’s only vague goal for the project stated that it had to be more of a “Hollywood-style game to appeal to a western audiences”. To top off the uncertainty, it was made in an era where the most popular games were all 2D and three-dimensional titles were just beginning to be commercially successful.

In the face of all these things, the team had an impressive degree of foresight when it came to the final product. Designer Takayoshi Sato said that the team “intended to make Silent Hill a masterpiece rather than a traditional sales-oriented game, and that they opted for an engaging story, which would persist over time – similar to successful literature.”

So for better or for worse – many elements of Silent Hill were made with the goal of introducing a deep-seated “fear of the unknown” and this philosophy can be felt in almost every aspect of the game – from the unclear storyline with multiple endings, to the oppressive fog that shrouded every moment you spent in the streets of the titular town. The low visibility was both an aesthetic and a practical choice – given the rendering capabilities of the hardware at the time – but according to an interview with the Swedish magazine LEVEL – “the plot was made intentionally vague and occasionally contradictory to leave its true meaning in the dark, and to make players reflect upon unexplained parts.“

The game director Keiichiro Toyama didn’t actually have much of a horror background – only having a passing interest in the occult, conspiracy theories and David Lynch movies. And due to disagreements with his supervisor, artist Takayoshi Sato not only designed the characters, but made all the game’s cinematics and full-motion videos all by himself over the course of two and a half years.

All of these details made the project sound like a recipe for disaster at the time, but they came together to make an accidental masterpiece – the game was a critical and commercial success that was praised for years, almost single-handedly being attributed to moving the entire genre into a more thoughtful and psychological type of horror compared to the B-movie jump-scares of the other games prevalent at the time.

March 1999.
Project Silent Hill was a success, and the team behind it – Team Silent – had proven themselves to Konami.

With the announcement of the PlayStation 2 – they were given an interesting opportunity to approach the series once again, this time without the creative limitations and with a higher budget, and the result? Silent Hill 2

Released in 2001, it’s not difficult to feel that Silent Hill 2 is more remake than sequel. While it doesn’t follow the story, much of the spirit of the original SIlent Hill is very apparent here, with the same design philosophy behind it; the droning atmosphere that looms, the uncertainty of every passing moment, the hesitation of taking another step into the foggy streets. In fact, it feels like Team Silent took the time to double down on the tense psychological horror atmosphere that the first game introduced and make a much tighter experience overall.

To give you a sense of what separated Silent Hill from the competition, allow me to make a comparison with the rival series – BioHazard (Resident Evil).

BioHazard was survival horror too, but it was campy, over the top and dare I say it – somewhat fun.
Silent Hill 2 couldn’t be further from that. Silent Hill 2′s entire atmosphere makes you feel a mixture of sadness, regret and sheer dread. It’s unsettling, queasy and it lingers.

This change in tone can be attributed both to the writing and the presentation: while Resident Evil’s protagonist is a former military pilot who handles everything with the enthusiasm of an action movie hero, Silent Hill 2’s James is just an ordinary guy who’s recovering from the tragic loss of his wife, the disturbing events of game confuse and traumatise him just as much as they do the player. The aesthetic helps the mood too; while Resident Evil took place in elaborate mansions and haunted houses – Silent Hill takes place in dilapidated apartment buildings and the decayed streets of an empty ghost town, populated only by grotesque scenes of things gone horribly wrong.

Sure, the gameplay might still resemble that of BioHazard, – collecting keys, solving riddles and struggling against unsettling enemies – but it’s a facade; like a thin veil stretched tight over the surface of something much more disturbing. 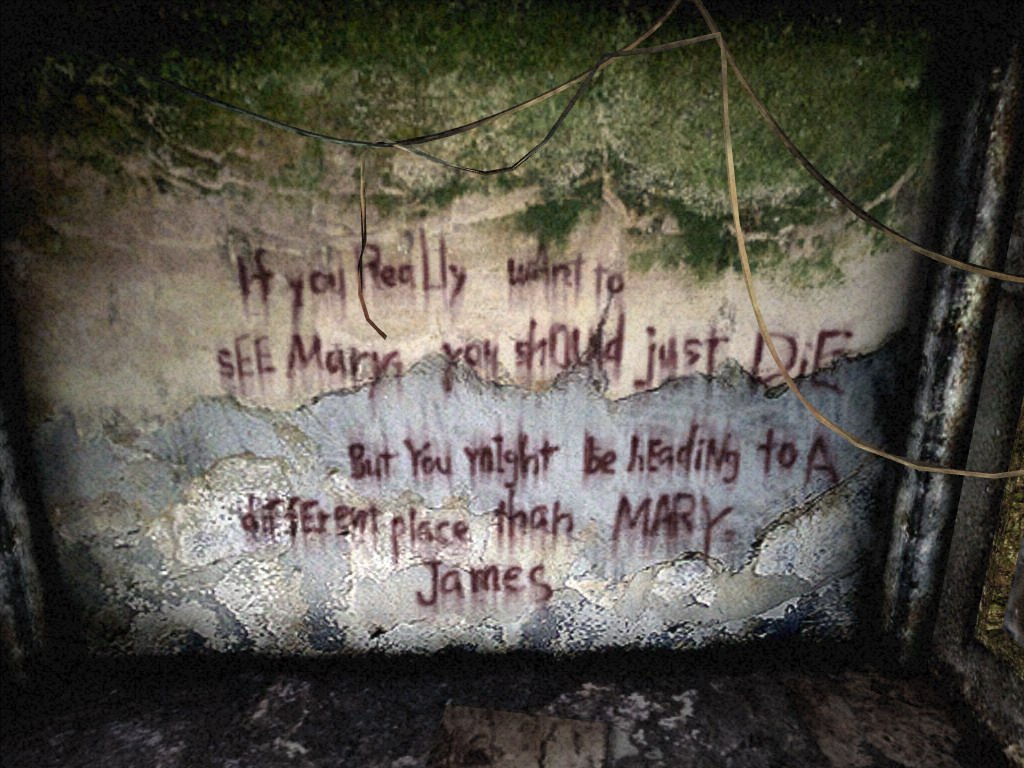 Over 16 years after its original launch, it’s surprising how well the experience holds up in an industry where games feel outdated if they’re three years old. While the gameplay might seem awkward; the presentation, sound design and the story haven’t lost the slightest bit of impact that they had all those years ago. In dealing with the struggles of the seemingly-ordinary cast, the story exposes their tragic pasts – exploring themes of trauma, guilt, loss, and redemption. Even the most boring characters end up having complex personalities and they feel like real people; they make you feel things for them. I’m not going to spoil the details for you; you need to see it for yourself. The story works because it’s subtle yet rich with layers of hidden meaning.

If you haven’t played these games yet – I strongly recommend that you try out at least Silent Hill 2 – but alas, this game’s current playability is in a very odd state. The game was originally coded for the PS2, and all the subsequent ports to other platforms have been seriously flawed in one way or another: –

I’d honestly suggest playing this on original hardware, but if you have trouble finding a PS2 – there is another option: emulation. The PCSX2 emulator on PC runs the original release just about flawlessly with the latest update and retains all of the quality while supporting modern hardware and controllers. So just grab your copy of Silent Hill 2, boot up the emulator – and prepare to see that town.