As a lot of my friends know, I am a sucker for a retro game especially ones I played as a child, because there’s nothing like letting your inner child out to forget about the stresses of life, even if it is only for a little while. Today I’m going to talk about one of the games that I will always go back to and that, my gamer friends is Alex Kidd in the enchanted castle. I could play this game for hours and hours.

So lets give you a bit of history about young Alex, The enchanted castle is the 5th game in the series and was released 1989,and came to Europe late 1990. Its also the only one in the series to be a 16-bit platform game. The main plot point to this game is that you have to help Alex find his father, King Thor on planet Paperock. To do this you will have to travel through 11 worlds to collect coins, or as they call them ‘Baums’, by either finding chests or attacking enemies that will explode and drop them, you will also have to battle some interesting creatures to rock paper scissors to obtain several items, and vehicles that help you complete the quest including a motorbike, pedicopter and pogo stick which each give him unique abilities. 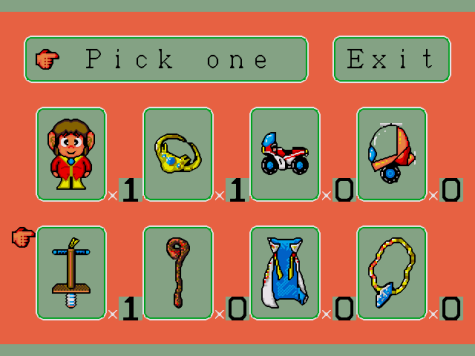 Now this game can get tricky as one hit from an enemy will result in instant death, with a limited amount of lives you cant run in all guns blazing as this would be a very foolish thing to do. With a lot of games that originally come from Japan, there was a slight change to certain parts, the main one being in the original Japanese version of the game, when Alex or his opponent lose a Rock Paper Scissors match the loser’s clothes will disappear, leaving him/her naked apparently to the rest of the world this was a bit risqué, so it was changed so that the loser gets flattened by a big weight. Several of the levels had their names changed.

A lot of people have given this game really bad reviews in the past, I think that’s down to them looking at the game in a much too serious way. I know this game is not super amazing but I love it, because it takes me back to when I was younger. Yes, as an adult now I could pick so many holes in the game such as how Alex moves, its like he is slipping on oil or the fact that the game’s 11 stages are short left to right strips peppered with the same rocks, trees, breakable bricks and generic enemies but, when I play it I don’t see that. I see the joy that this game gave to me as a young child, its up there with others such as Sonic, James pond, Altered beast and Lemmings but compared to today’s standards of gaming they are most likely considered terrible games, because they don’t have intricate plots and the graphics are rubbish.

For me playing a retro game is all about letting the inner child out, and reminiscing on how simple life was at that age, and how much I loved playing these games, so for that reason I would have to give Alex Kidd in the enchanted castle an 8 out of 10.