Strands may break alone
But twisted make a braid
Together on their own
The journey shall be made.

Pyre is the latest game by indie developer Supergiant Games. A developer known to have a track record with highly stylistic and story heavy experiences that have great music and some amazing art. I’ve been looking forward to this review for a while now since I loved every game they’ve put out up till now. So let’s see if Pyre holds up!

The story is set in a place known as the Downside. A place where prisoners who are known as exiles are kept. You are one of those exiles. On the verge of death you are picked up by three character and they begin to call you The Reader as you will be the one who is going help them cleanse their souls so they may go back and live their lives in the Commonwealth. You are tasked with helping exiles complete rituals known as Rites which is kinda just magic dodge ball. And eventually choose whether you will allow members of your party to go free or stay in the Downside forever.

Which is an absolutely gut wrenching decision to make as not only will this mean that they will be free and happier. But they will also be gone from your party so you won’t be able to use them in Rites anymore. The world of Pyre seems to have a rich lore to it but I never thought of it as overbearing, but just something I can look into if I were ever to get a little curious. But the main thing that makes the story amazing is the colourful cast of characters and side characters. So much charm in each and every one that it’s hard not to love em. 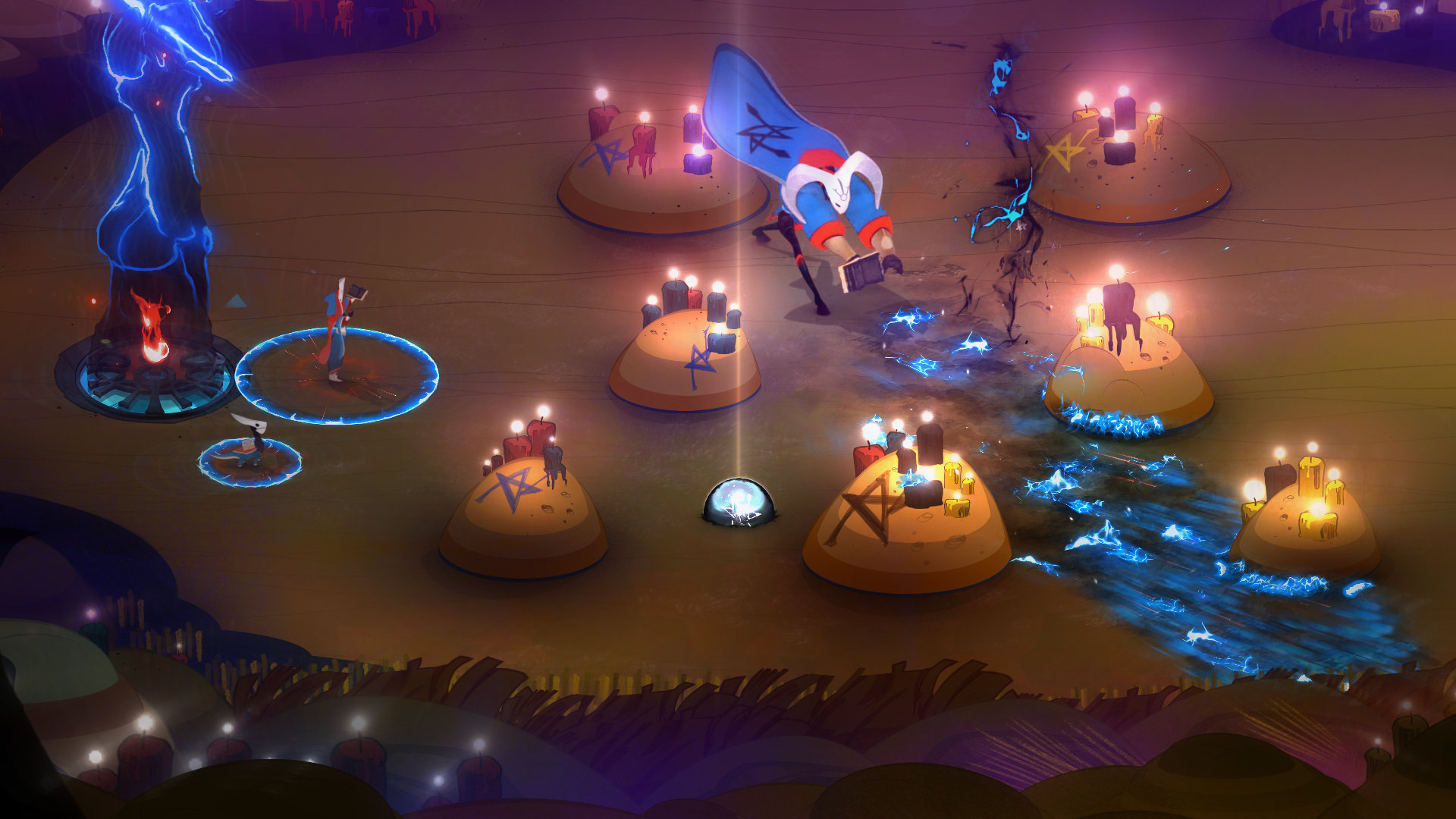 Gameplay is presented to you in a sort of visual novel style, where you make decisions on where to go in the games beautiful hand drawn overworld. You also have some very tough decisions to make at times. And then the meat of the gameplay comes in the form of Rites. Where you control a team of three against another team to get the ball in the opponents goal. Different characters have varied abilities, sizes, and speeds, you can even give them additional items that give stat boosts and some that have unique properties. this leaves you with a crazy amount of options to go about each rite.

But as you use certain characters more often they will become one step closer to becoming cleansed and you will have to decide to let them go. Then the decision comes up whether you want to fulfil the wishes of a loyal companion or keep him around for purely gameplay purposes. Along with the story there is a versus mode. AI opponents are serviceable but you’ll eventually get tired and bored of them. Playing against a real opponent is where the real fun begins as it becomes a game of finding the perfect team composition and trying to outsmart each other. As of right now there is no online mode but the game would surely benefit from one. Till then the versus mode is an insanely good local multiplayer game.

The presentation of this game is by far some of the best I’ve seen in an indie title. The amazing art of the overworld is just down right beautiful and it left me awe-struck at times. And the visual effects in Rites and character art are all great. This is the kinda game where I could take a screencap at almost anytime in the game and it’d be a great screensaver.

One of Supergiants highlights in each of their games has been their music and Pyre is no exception. The music has a wide range of variety and it’s always changing up tracks to keep it interesting. And out of all the previous games I’d say that Pyre has my favorite soundtrack.

Here is one of my favorites:

Pyre completely blew my expectation out of the water as I was not prepared to be so emotionally invested in all of these characters and letting go was even harder. I don’t have any complaints for this game and I can’t wait to start a second playthrough. If you liked Bastion or Transistor then please do yourself a favor and check this one out. It is arguably the best one of those three.

Let us know what you thought about the game in comments! And stick around for more reviews!