This week, we got a MASSIVE Hearthstone info blowout – Here’s what I thought of it.

HOLY MOTHER OF BALLS I HAVE NEVER BEEN AS HYPED FOR HYPOTHETICAL BITS OF DIGITAL CARD BEFORE.

In about a month, we’ll be kissing goodbye to ‘Journey to Un’Goro’, ‘Knights of the Frozen Throne’, and ‘Kobolds and Catacombs’… And thank GOD for that; I’ve been a massive Hearthstone fan since launch, but I took a nice 2-year break from around the launch of ‘League of Explorers’ until ‘Kobolds and Catacombs’ drew me back in – and thank god – because it means I missed almost an entire year of the 2-year reign of quests, death knights, and carnivorous cubes. The entire year of the Raven (That’s all the cards released in 2018), save for maybe 4 or 5 cards, has almost completely failed to overtake the meta, and instead ended up kowtowing to its predecessor… And so it is that no matter what, March 2019 was set to be the most dramatic shift in Hearthstone history.

Then, we heard what was actually coming. It all started with this image – A teaser for what kind of aesthetics the upcoming ‘Year of the Dragon’ will have. 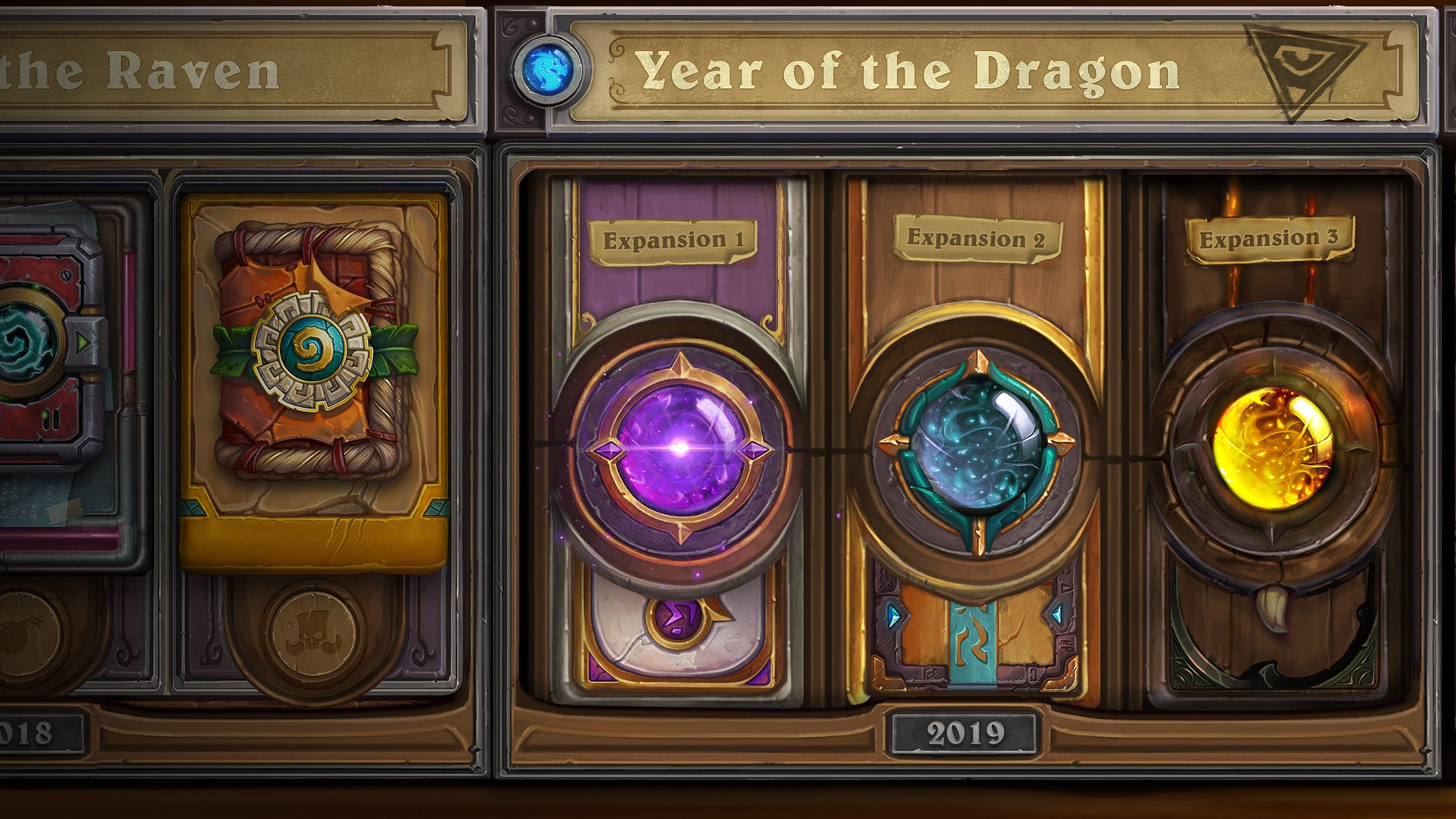 Looks pretty damn sweet, right? Well, before we go on to do the obvious predictions, we must consider one thing – For the first time, the next three expansions will follow a single story thread that will last the entire year. As someone who has always loved Hearthstone’s sillier, indulgent, and ultimately more character-focused moments, this is the best news I’ve ever received… And so, we must consider that this entire year will not be three isolated themes, as was the case with last year (A spooky forest, a goofy laboratory, and a gladiator arena with a spankin’ theme tune?), but each a third of a unified whole. Let’s start with the first.

When one sees purple and white in this way, there are two places one’s mind can go – Dalaran, the magical kingdom of man, or the Dranei, the Russian-accented spacefaring Paladin race. Both are fantastic ideas, with their own unique twists, but for me the Dranei take it – They have a unique and alien culture, complete with the ability to build and fly spaceships, and they were a huge part of ‘Legion’, the most-recent-but-one World of Warcraft expansion, just as how Zandalar ended up being a major inspiration on ‘Rastakhan’s Rumble’. Dranei have been a big part of Alliance play for a decade but in their entire lifespan, have only ever received two legendary minions in Hearthstone – One of whom (Stargazer Luna) isn’t even a character in Warcraft lore. Thus, they’d be a prime candidate for a new expansion.

That said, however – This new look into the single-player content may point otherwise.

Yep, that looks not like Draenor, but the sewers of Dalaran. Ah well, ‘One night in Karazhan’ brought a fun twist on an already established, dry ‘magic’ location, so I’ve no doubt that the Hearthstone will manage to inject a metric tonne of flavour. What intrigues me more are the three playable characters we can see – A Pandaren Warrior, a Sethrak Shaman, and a Vulpera Rogue. What’s fun to note is that none of these are associated with Dalaran, and indeed the latter two are non-playable races native to Zaldalar. It seems that whatever happens, we won’t be following characters native to the locations at hand, but rather visiting adventurers. This has me exceedingly hyped, as we may indeed see playable characters that are outside of the core Warcraft set- perhaps Virmen, Hozen, or even Mantids will come and share an extended limelight. Whatever happens, it seems Hearthstone is moving away from the tendency to highlight a theme for a brief flash and then discard its themes forever. No, we’re taking the lesser known parts of the Warcraft universe and letting them all go wild as a collective.

And so, the other two expansions of the year? Well, a part of me wants to say the 2nd expansion – Typically launching in August- is themed around the Titans. For those unaware, the Titans are godly planet-sized beings that forged the universe; among them being Sargeras, the main antagonist of the Warcraft franchise overall. Responsible for the creation of Dwarves, Gnomes, Giants, Mogu, and others, the Titans are often considered some of the most powerful characters in the lore – While they may be a little off the scale for being cards (After all, is it really fair to pitch a regular old priest against a god?), their machinations and the idea of space and time would indeed form a fantastic basis for the 2nd act of a big story; and would especially tie into the idea of a journey to stop some powerful foe – After all, if you need to beat someone big, ask the biggest guy there is for advice?

That foe, I’d guess, will be a dragon – Not Deathwing, he’s already got 2 cards in the game already, but perhaps a brand new character exclusive to Hearthstone. Perhaps they’ll appear throughout the solo content before finally dropping as a card in the final expansion, completing the journey. That’d be how I’d do it – Use the long-form storytelling to build towards a massive C’Thun-style card that forms a whole new archetype all by themselves. Maybe they will form the very core of the final expansion, just as Doctor Boom did for the Boomsday Project.

Past that, I don’t want to eat in too much to the story aspect- the return of the dungeon run format excites me, especially after the successful mutations that Witchwood and Rastakhan’s Rumble gave us; with an extra foot on the pedal justified by the return of Adventure-style chapters, we could be looking at the best single-player content the game has ever had, guaranteed- the news that they’ll include non-combat ‘friendly encounters’ intrigues me, as does the news that each class will have multiple hero powers and that you’ll have the chance to remove cards from your deck- all in all, it seems this new attitude to solo content will take inspiration from everything Hearthstone has experimented with over the last half-decade, and combine it into something truly special. I got hyped for expansions in the past, but never before have I been chomping at the bit to see what exactly we get to experience purely from a design perspective – The gameplay experience is almost secondary to seeing the storytellers on the team step into the spotlight. As someone who’s using Hearthstone’s storytelling techniques to write a dissertation on gameplay narratives, this has been a fantastic news week.

As for the game itself? Well, shuffling Doomguard and Naturalise into the hall of fame will certainly freshen up Druid and Warlock for a start – They’ve been some of the most reliably strong cards out there for 5 whole years and they do indeed have a tendency to stale up the game. But what made me both gasp in surprise and squeal in glee was the news that Baku the Mooneater and Genn Graymane – Characters that were scheduled to remain a part of ‘Standard’ play for another year, are being shuffled out early. Yes, it seems they were such a tyrannical part of the narrow meta the Year of the Raven gave is that there’s simply no option left but to kick them to the pavement… And that means that this new year will be the freshest year we’ve seen since launch – Maybe we’ll see more decks based on Doctor Morrigan, or Liam Greymane, or Akali, The Rhino. The consensus on the Hearthstone YouTube community seems set – No-one can begin to predict the state of the game in 6 weeks time, and that’s a fantastically exciting prospect. The fact we can earn a new version of ‘Whizbang the Wonderful ‘- titled ‘Zayle, Shadow Cloak’ – means Blizzard is leaning towards a set that could invite in a whole new generation of Hearthstone players. I’ve already managed to rope a few in. Combine this with a few nifty additions – Including the smart deck builder, which will help new players to understand popular decks and build around them, and the fact that Arena play will draw from old card sets in completely unseen combinations, and it’s clear that this game is getting not just a new expansion, but a complete overhaul.

Whatever happens, one thing is for sure – My favourite game will soon have an entirely new face, and I think I’m ready to fall in love all over again.