I would rather be doing SAT Math.

Maize is a game, I think. Actually nah it’s more of a stream of bad jokes that you have to listen to while also solving some of the most brain dead puzzles I’ve ever had the displeasure of going through. Maybe I’m being a bit too mean to it but I seriously did not enjoy this game so let’s see me complain about it a bunch now.

Maize is a game originally released on the PC in 2016 and even then it wasn’t great and now it’s on PS4 and it’s still not great, who woulda thought? The main thing about this game is the premise, and it sure does pull you in. It’s about sentient corn or something. Yea some scientists messed up in an experiment or something and boom talking corn. This was enough to get me to at least start the game. Later on in the story you also meet a Russian bear who’s annoying and Russian and being Russian is his thing and that’s it. Theres also some like giant corn monster bad guy and a corn queen that calls you the chosen one or something like that but I stopped paying attention because I was practically half asleep from how boring this stuff was. 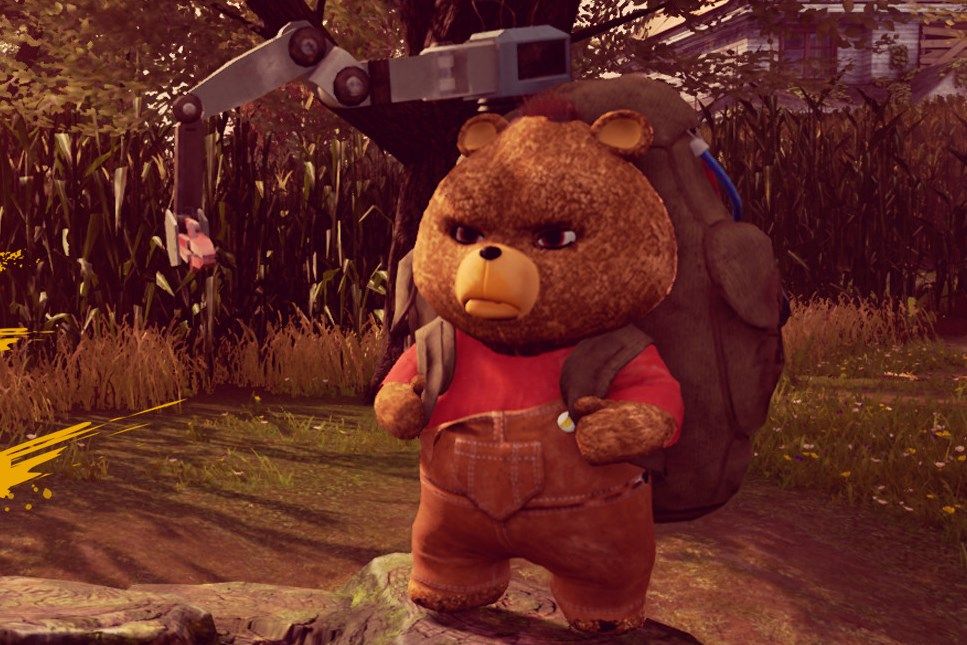 Gameplay is the same as stuff like Gone Home or one of those walking simulator games that the kids are talking about these days. There is none. You walk around, pick up items, read notes, smash your items onto random things until the puzzle is solved and get rewarded with annoying corn person dialogue. You get some neat little notes here and there to read which can be fairly entertaining but that’s about it. Once you solve the puzzles you get more puzzles and more dialogue and new areas get presented to you, and these new areas are literally just blocked off by a bunch of red boxes which seems like the laziest thing ever but eh whatever this game has bigger problems.

Now the boring gameplay can be forgiven if the game has anything interesting about it other than the premise. Or if the writing is good. But after meeting your corn buddies for the first time I was kinda hoping it was the last time I would ever see them as they all just irked me the wrong way and down right annoyed me. They aren’t really that funny and just kinda fumble about like idiots. I can say thought that the voice acting was quite nice and the characters were well performed. The only two characters that I found interesting were the two scientists. One’s dumb and ones mean, think Ren and Stimpy I guess. They’re conversations are laid out in sticky notes all over the lab and they sometimes also drop hints on the puzzles.

The game looks and runs alright I guess. There was also just some really odd frame drops and weird motion blur that made me sick trying to play this game. This is pretty much enhanced by the boring yellow-ish brown color scheme in the first area that looked like puke to me. The game runs fine I guess but it just has odd moments of incompetence when it comes to the frame rate. The art style is also really unappealing, it all just looks really ugly and weird. And I love weird gross looking art styles but I believe if you’re gonna have an art style like this at least make it unique enough so it looks charming rather than boring.

In the end Maize turned out to be kind of a boring mess. I’m pretty sure there will be people out there that absolutely adore this game and it’s comedy and puzzle solving and all that but it just wasn’t for me. I do enjoy games of this genre but this just wasn’t a well executed game. To quote my friend who was playing this with me, “I would rather be doing SAT Math.”