Soul Calibur VI hits the shelves in the UK today and with it some truly ridiculous characters who have no right in contending with many of the other fighters so lets take a second to discuss the worst characters in fighting games:

So I pretty much had to google “fighting games” to see if I could find any that I’d ever played, and I couldn’t.

So I don’t really have a character that I could say “Oh yup, that’s 100% the worst one for me” because, well, all the characters are the same to me! I think the closest I have ever been to a fighting game is watching an ex play Mortal Kombat X.

I never picked up the controller because I personally don’t feel I am skilled or coordinated enough to play a fighter, as someone who generally whimsically smashes buttons in the hope that I’ll get somewhere… I’m not sure this is a genre I’ll ever get into.

Clarissa is a poor person to start this really. Anyway let me, a fighting game fan, step up to the plate. There’s plenty of garbage characters to choose from but I’m going to pick someone who’s actually TOO good for his own…good. Eddie “crazy legs” Gordo. Introduced in Tekken 3 to basically be a crutch for anyone who just button mashes, Eddie is a much-needed representative for capoeira a Brazilian fighting style that combines dancing and badass moves. Now, what makes Eddie so shit is that pretty much everything he does flows perfectly regardless of what buttons you mash. He spins and flips and eats the opponent’s health bar in no time at all. Sure he’s been balanced in recent years but his OP status back in the PS1 days still stings to any old school Tekken fans. As a little brother, I can still remember picking him EVERY SINGLE TIME my brother and I played. Seems like I invented trolling about 10 years before it became a thing. You’re welcome, internet.

I’ll take a second for the guilt to subside as I reveal that I have only ever played one fighting game: Super Street Fighter IV on the 3DS.

Yep, the one with the combos on the touch screen, thereby ruining the whole flow of a fighting game.

But there was one character in that game I always found to be so needless, so pointless, and so ridiculous that I found my encounters with them infuriating from the cutscenes alone. 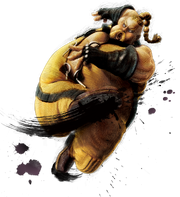 Rufus. A giant fat man in a yellow jumpsuit, with a tragic haircut and mustache.

He was not only an extremely annoying person to fight against based purely on how ugly he is to look at, but also his personality was so loud, obnoxious, and whiney that I genuinely felt like just virtually beating the shit out of him wasn’t catharsis enough. Never before has a design made me so violently angry, and I blame the character personally.

I’m gonna break the rules a little and talk about MUGEN. If you don’t know what it is the best way I can describe it is that it’s a free software that allows you to make fightings games. And people have used it to make some genuinely amazing fighting games. My favorite being HyperDBZ which is an extremely competent Dragon Ball Z 2D fighter that came out years before Dragon Ball FighterZ was even a thought.

Now that you have gotten your little history lesson on MUGEN let’s talk about SaltyBet. Now, this is a live stream that will probably never end where people can just bet virtual currency against random characters that have been made in MUGEN. Needless to say, it’s fucking amazing. But let’s talk about some of my favorites of the funniest and downright dumbest contenders in this massive SaltyBet roster

Here we have Omega Tom Hanks

Here is the MUGEN wiki on OTH:

“Omega Tom Hanks is a six-button character, whose Normals consists solely of tossing projectiles made of DVD covers of films that he starred in, which vary in direction depending on button press. He has no Specials, and his only Hyper, the Hooch Bomb, requires OTH to be at maximum Power to use but causes a near-instantaneous, full-screen, unblockable OHKO. On top of all this, OTH himself is completely impervious to attack and damage due to lacking any hurtboxes, rendering him impossible to defeat by normal means.”

Then we have everyone’s favorite Colonel. Colonel Sanders

He was created just to rival the extremely popular Ronald McDonald in the MUGEN community. He’s the only one I chose to show you who is an actual fighter and needs to work for his win instead of hmm I dunno, Chuck Norris?

Yes, that is just Joseph Joestar from JoJo’s Bizarre Adventure but with a quick palette swap, he’s become the Texas Ranger himself.

This is a piece from his Wiki entry:

“When going against Chuck Norris in a battle, it is impossible to win against him with a normal character, since he lacks hitboxes. This makes him immune to every single type of attack possible, even those which are a full-screen one hit K.O., and can only be K.O.’ed by coding workarounds. He has stats that are set to the normal M.U.G.E.N player standard, so you’d expect him to be normal in some manner, but in reality, because of the lack of hit markers, it prevents most characters from doing any type of damage to him.”

I think I’ve gone on long enough. Check out MUGEN and SaltyBet on your own for your dream matches to come true. And yes, I know I didn’t follow the rules very much I just wanted to talk about a thing I love but I guess uh, Blaze from the early 2000’s Mortal Kombat games was pretty fucking dumb.

This is tough for me to answer as i believe most characters have their place, and a lot of time the ‘bad’ or ‘stupid’ video game characters come from Japanese craziness. But one of my least favourite has to be Gon the little dinosaur. Even though he’s pretty awesome in personality (enhanced if you watch the Gon series on Netflix) his style was just ridiculous and not in line with the rest of Tekken 3. I also despise players such as Mokujin who have that generic ‘i can be anyone’ move set….Can you tell i like Tekken.