With the explosive captain marvel coming out this week we look at what we predict and hope for future MCU adaptations.

*cracks knuckles* The obvious choice to talk about would be any of the fox properties. With Marvel recently claiming rights back from FOX entertainment they now have a vast array of new heroes to show off and play around with, I personally think they’re going to try and do Galactus right (and the fantastic 4) as he can seem like a real threat after Thanos and give a reason for everyone to re-unite. They can also tie the elementals and galactic side of the MCU that they seem to have planned.

I also have a hope that there will be some form of Marvel Knights and an introdcution of Moon Knight. They can re-launch Wolverine, Punisher and Daredevil along with the existing Deadpool to create a really fucking awesome cast of R-rated heroes who can be a very alternate version to the avengers. I really can’t see this happening on the big screen however.

Thor is one of my favorite comic book characters. I love his dialogue, I love his powers, I love the cast surrounding him. And thus, I’ve always secretly hoped that he survives Avengers: Endgame, because his MCU incarnation is not only every bit as badass as his comic counterpart but pure comedic perfection.

Now, in the comics, Asgard was rebuilt on US soil by Thor; and it’s safe to say he never asked permission. He is a king, after all. In retaliation, the US government dispatches Iron Man to parley with him. 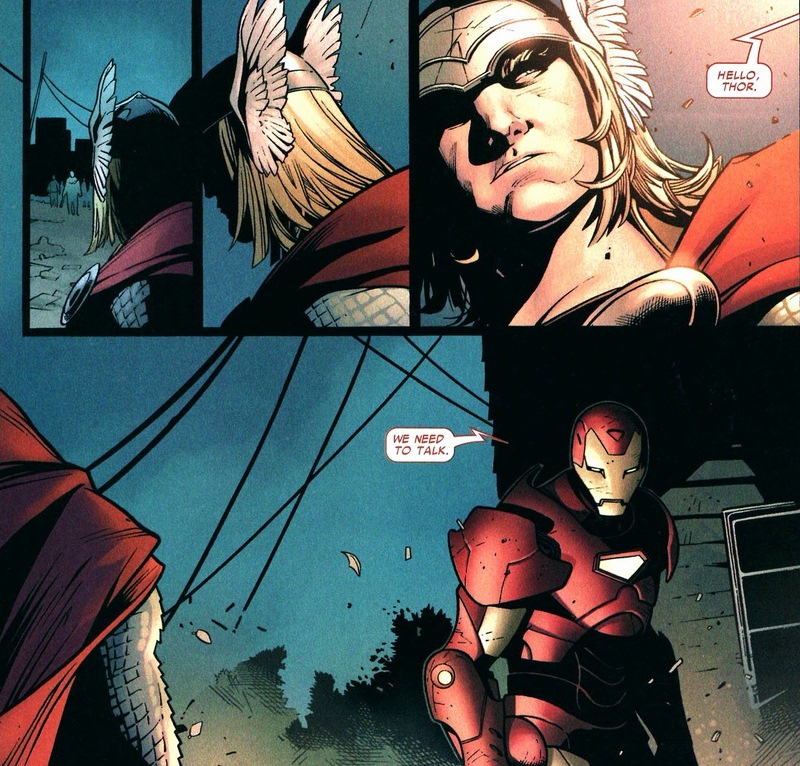 It doesn’t go well. It ends with Thor standing his ground and sending Iron Man running away with his tail between his legs, defeated. It didn’t help that Thor was presumed dead and that Iron Man had cloned him to assist in the civil war- that made Thor mad, as you’d expect.

I’m not going to post the scene, but it’s a fantastic display of everything that makes the more mature Thor such a powerful character and would be the perfect start to a more criss-crossed phase 4, as some character (Iron Man may not be around, but perhaps War Machine or Bucky Barnes’ Captain America) comes to insult Thor mere months after he helped to save the universe from Thanos, and Thor peacocks in retaliation to this insult. It’d be a powerful reminder that you do not mess with Thor, and the Earth-based Asgard would be a perfect way to establish Thor movies going forward.

As you may already know from my previous articles, the MCU is something I am rather passionate about, much like many here at Respawning. So with that in mind, I am going to do my best to try keep this short and not go on too much!

So, hopes and predictions. My hope is simple, I hope that the overall quality that has been presented to us over the last ten plus years doesn’t dip, and given how high that quality has been, this is an almighty ask! Even Iron Man 2, Thor: The Dark World and Ant Man & The Wasp (the three I rate the lowest in the MCU), I still see as solid 7/10 films. And the likes of Captain America: Civil War, The Winter Soldier, Black Panther and Avengers: Infinity War are up there as some of my favourite movies of all time. So to keep up that level quality is going to be difficult for Marvel, but I have faith they will not let us down!

My predictions are mostly the obvious. I believe that Spider-Man, Black Panther, Doctor Strange, Vision, Scarlet Witch and Captain Marvel will be our new core team of Avengers going forward and that a lot of stories will revolve around the cosmic side of the Marvel Universe, with the likes of Captain Marvel and any surviving Guardians of the Galaxy members opening that door. More specifically, I can see them moving forward with the Secret Invasion storyline, and that being the main thread going through Phase Four.

I also predict that we will not be seeing the X-Men in Phase Four. It’s too soon and I think the best bet is to give the audience time away from everything mutant related to make us miss them, and then hopefully be more accepting of the oncoming reboot. The Fantastic Four on the other hand is a different story as I fully expect these guys to show up at some point very soon, maybe even being drip fed into different movies over Phase Four, culminating in their own movie down the line. ~ Does that count as keeping it short?

As someone who just does not care too much about Marvel other than the MCU I can’t really say what exactly I would like to see in future films.

But there is one character who I have heard of and seen that I always wanted to see on the big screen and that’s Taskmaster. The concept of a dude who can just copy other peoples moves is so cool to me and it’s like being the ultimate overpowered fighting game character. Funnily enough the first time I ever even heard of this mad lad was Marvel vs Capcom 3.