Bad Times at El Royale is dropping this week, and has much of Respawning rushing to the cinema to catch this cinematic experience on the big screen. To celebrate the release of the hit film starring Jeff Bridges and Chris Hemsworth (Also Jon Hamm who we all love!) we take a look at our favourite films that we just HAD to catch on the big screen; this can be arty flicks right through to the anniversaries of classics – The one rule is that we just needed to flock to the big screen to see it!

Last year I took a trip to the cinema with my parents and girlfriend to go see Dunkirk – Now Christopher Nolan will only ever make cinematic beautiful films but my god there was something special about this! As I sat there watching a movie that shows an almost unbelievable moment in human history I found myself really getting sucked into the tension of the situation and unlike most blockbuster films these days I really couldn’t predict what would happen to the various characters; throughout the film the soundtrack has a constantly sounding metronome click which obviously ramps up the tension and reminds you how much of a factor time played in the events shown. Afterwards me and my family talked about the event itself rather than the film and I think that just proves how powerful the movie was, it wasn’t just something to watch on an afternoon with my family it was a view of something none of us were around to witness.

Growing up in the Harry Potter generation, they were obviously the biggies for me! We didn’t really go to the cinema much growing up, but we would always see the Harry Potter films within the first couple of weeks, BUT I kind of feel like that’s cheating and super obvious, so I’m going to pick another occasion. When I was at University, a local picture house was showing Grave of the Fireflies and My Neighbour Totoro in the way that they were always intended, as a double bill in what I THINK was an anniversary screening. I’d seen Ponyo, Spirited Away, Kiki’s Delivery Service, Porco Rosso, and The Cat Returns – I didn’t want to spoil the surprise by looking up the films but I had the Ghibli bug and I just HAD to see it at the cinema; the cinema in question is pretty small, maybe only 30ish people in a screening max, being a tiny old art deco theatre, and the seating is as such, the sort of place that’s full of the past. Anyway, spoiler free, but sitting through Grave of the Fireflies has to have been one of the most harrowing cinematic experiences of my life. Honestly I am so pleased My Neighbour Totoro was on straight after because oh my gosh… I don’t think I’ve ever been so effected by a film (Apart from maybe when Snape died; spoilers).

Almost 10 years ago, James Cameron’s Avatar was released on the silver screen – We’ve already talked about why this film was great in a different Club a while ago, but this film is incredible. The cinematography is amazing and the CGI was on point; there’s a reason why this film is so highly regarded for me though. When I watched the film, I was in the front row of the cinema – Normally this is a painful experience as you’re staring up at the screen with a crick in your neck… But not this time, the film starts with a POV shot of something flying through the skies of Pandora; this shot in any circumstance is incredible, but when you’re looking up at a 108″ 4K projected screen, it feels like you’re really flying… I have yet to have a film beat this experience and I think the only thing that can beat it is going to be the sequel – Here’s hoping it’s not that far away. 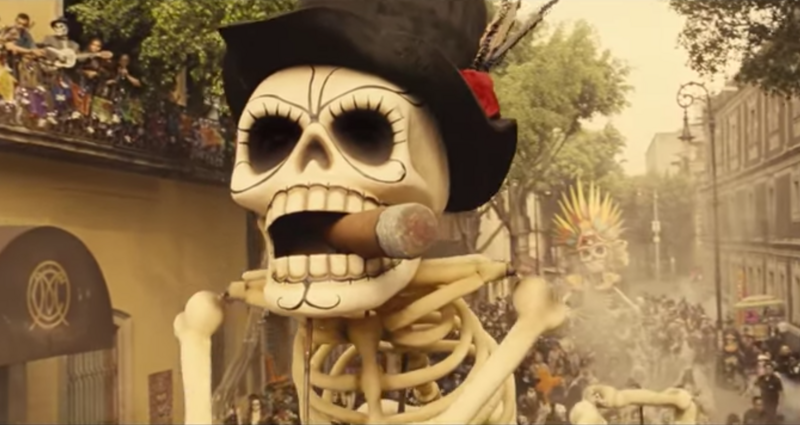 Given that the nearest IMAX to me is in Bradford, an hour’s drive away, I don’t often get to experience my favourite films in any way other than the standard cinema format – That is, 2D screen, in a normal cinema, eating overpriced Revels. I’ve only ever seen one film in IMAX – 2015’s ‘Spectre’. You can say what you will about the film overall, I personally remember it as a mediocre but enjoyable flick that simply had the bad fortune of being the sequel to ‘Skyfall’, which was utterly fantastic.

But what did grip me was the fantastic opening scene, as James navigates his way through the Dio de los Muertos celebrations in Mexico City, walking along the street to follow the parade, then into a hotel with a young lady, before abandoning her at the bedside so he can jump from her window and take to the rooftops, ending in a heart-pounding action sequence where James flees from crumbling buildings and hangs from a crashing helicopter, filmed mostly as a single long-take, and all set to a thumping drum-beat that gets your own pulse syncing up to the action on-screen.

It’s honestly my favourite opening to any Bond film, and with great reason.

For me, I’ll always remember the closing act of Spiderman: Homecoming, as one of my favourite bits of film in recent memory, if not for it’s sentimental value alone. Spiderman: Homecoming was the last film I saw with my father, and the last evening I spent with him before his unfortunate passing in August 2017; the conflict between Peter Parker and Adrian Toomes had been subtly building up step by step throughout the film, with it all boiling to a dramatic finish in the remains of a crashed Starks munitions plane that Adrian, now adopting the villainous persona of Vulture, had brought down accidentally through a scuffle with Spiderman both inside and outside the plane; seeing the way that the clips that followed were shot, the fire wrapping slowly amongst both players as they struggled towards a final resolution – Following this, the film ends with Parker rejecting the Avengers initially, before becoming one of their key companions (And casualties, spoilers) in Infinity War (Which I still need to see!).